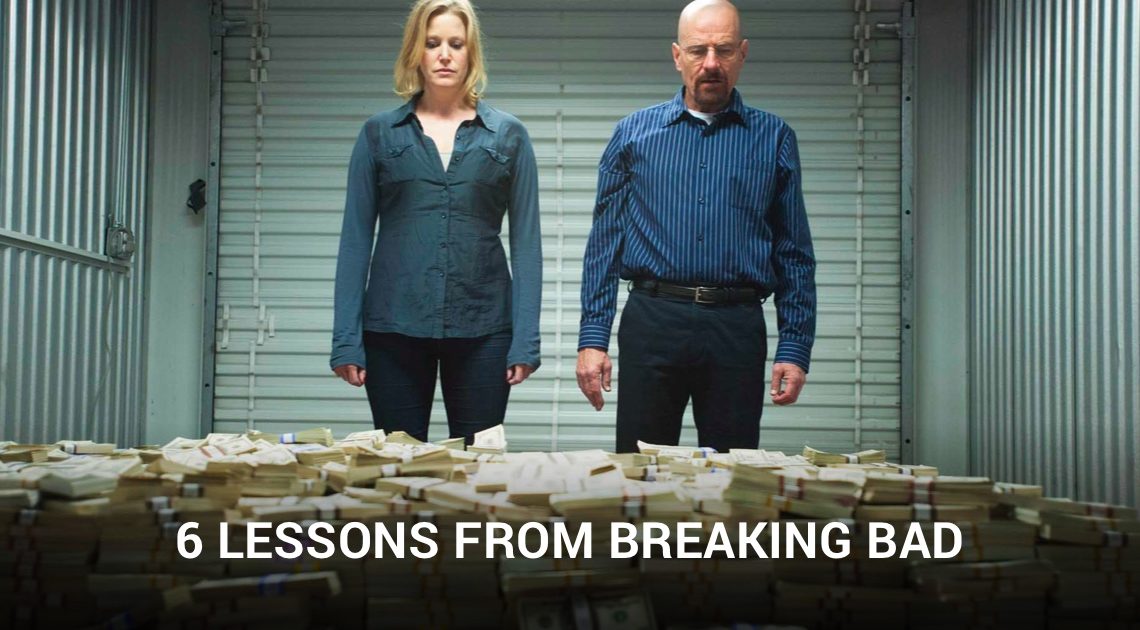 The television industry has been a source of inspiration for quite some time and still has a lot to teach us. Keeping in mind the year goal for 2019 as money saving, we are back with another chapter to your aid. Breaking Bad has been a major favorite of all age groups. It has been binge-watched, repeatedly watched and has never failed to entertain. Apart from just entertaining, we put forward its potential to teach some life lessons especially the ones affecting your finances.

The protagonist, Walter White Sr., who is a graduate in chemistry, is lead into a series of unexpected events and financial crisis after being diagnosed with lung cancer. As White claims, whatever he does is for the good of his family, he tries his best to ensure financial support to his family after his death.

In order to make that happen, he enters into the illegal and unforgiving business of producing Meth and drug dealing.

While his intentions were good, his actions were not. This is why we can learn a few great life lessons from Mr. Walter White:

Walter White’s first and foremost mistake was that he never budgeted his income. Budgeting should be the priority the day you start earning, whether it is your salary or pocket money.

After being diagnosed with cancer, White lost his calm and did the first thing that came to him, making Methamphetamine or Crystal Meth, an illegal, class-A drug. Although it wasn’t right, he had to do something to pay the bills. Had he been maintaining a budget from the start, he would never have been in such a situation.

It is up to you whether you buy Life Insurance or Term Insurance or Medical Insurance, but do get yourself insured. It is for rainy days like these you need insurance. Had he been insured, Walter White would have never needed to “Break Bad” and cook Meth.

White never disclosed anything about his “work” to his spouse or family. It wasn’t until much later that his wife found out and, surprisingly, decided to help him. But that came at the cost of their relationship being damaged permanently.

TEACH MONEY MANAGEMENT TO YOUR KIDS

This is something school does not teach. It is the responsibility of parents to bring up a child who is financially literate and can deal with various different financial situations. White never thought it to be important to teach his kids about managing money rather with that kind of illegal money flowing in, he got his son an expensive car. Now that counts into bad parenting and worse financial management. White should have worked out a way of investing the huge amount of money in something that grows his money rather than storing them in barrels and under the floor.

Having material desires are normal, but there is a fine line between having desires and being outright greedy. White’s growing business and income made him produce more and more Meth, even more than what he ever needed, amassing a ridiculous amount of money. But what needs to be kept in mind is the risk associated with it. Same goes with investing, you may be lured into investing more and more at uncertain returns but never forget the risk it brings along.

PUT YOUR MONEY TO WORK

This is the most important factor if you want to grow your money. While you work hard to earn, put your money to work so that it grows. Saved money is stale money, invested money is increasing money! Invest in Mutual Funds or Fixed Deposits or Recurring Deposits, anything that pleases you but make sure your money is growing.

780
Close
Get the mobile app on your iOS/Android Device